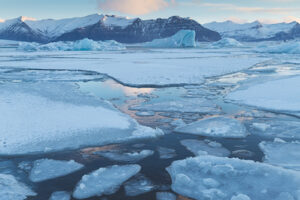 he Greenland ice sheet is a vast body of ice covering 660,235 square miles, roughly 80% of Greenland’s surface. after the Antarctic Ice Sheet, it is the second-largest ice body in the world. The ice sheet is nearly 1,500 miles long in a north-south direction, and its width is 680 miles. The mean altitude of the ice is 7,005 feet.

And it is all melting.

Research from the University of Bristol found that freshwater losses in Greenland quickened since the early 1990s. The south-east of the island saw losses rise by 50 percent in less than 20 years.

Professor Jonathan Bamber from the School of Geographical Sciences said that “Greenland has been losing increasing amounts of mass. What was unclear was how much of that was due to losing water to the ocean, as opposed to factors like reduced snowfall.”

This increase in the volume of freshwater flowing into the Atlantic may conflict with the Atlantic Meridional Overturning Circulation (AMOC), the current that brings warm tropical water to northern Europe. It may also decrease the ocean’s ability to store carbon.
The Greenland Ice Sheet experienced record melting in recent years and is also likely to contribute substantially to sea-level rise.

If the entire ice sheet melted, the global sea levels would rise 23.6 feet. Recently, fears have grown that continued climate change will make the Greenland Ice Sheet cross a threshold where the ice sheet’s long-term melting is inevitable. Climate models predict that local warming in Greenland will be 3 °C (5.4 °F) to 9 °C (16.2 °F) through this century. A rise this size, would engulf nearly every major seaside city in the world.

Learn more about how Greenland is careening toward a critical tipping point for ice loss.

If you want to help improve our planet and climate for future generations, The Nature Conservancy is, in my opinion, one of the most efficient environmental organisations in the world.